TAMPA, Fla. /Florida Newswire/ — “Christians in the Mirror,” a first-of-its-kind independent documentary produced by Joshuacord, Inc. and In Altum Productions, takes a hard look at how America and the West have not been very involved in the global persecution of Christians. The producers say they’re creating a social media marketing plan for this indie film that interviews Christians from the Middle East, Africa and Asia. 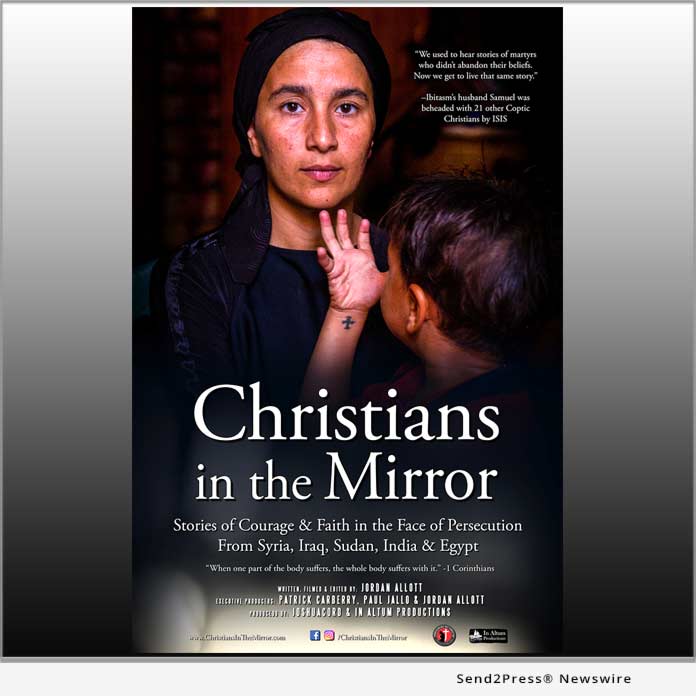 Paul Jallo, president, Jallo Oil Distributors, and one of the film’s major benefactors and executive producer, says that they hope to reach new audiences, nationally and internationally. They’re hopeful that this new social media campaign will create momentum, encourage viewers to download the film, view it and share it.

It’s the hope of the film’s executive team that “Christians in the Mirror” will activate Christians across America to stand united to help those under persecution for their faith. Whether it prompts people to volunteer, donate or spread the message, the desired outcome is more recognition and support about the importance of religious freedom.

“Christians in the Mirror” includes interviews with religious leaders and persecuted Christians in Syria, India, Iraq, South Sudan and Egypt. Ultimately, it’s a wake-up call for people to help.

“We want our Christian brothers and sisters in the Middle East, Asia and Africa to know that they’re not alone and to encourage all who believe in human rights, religious freedom and freedom of conscience to step up and speak out,” Jallo says.

This social media campaign is designed to build awareness and to drive audiences to view the film on select web platforms.

“We have much to be thankful for as we move into the Christmas season,” Patrick Carberry, founder of Joshuacord and film co-executive producer, says. “We have religious freedom in the West. Many others in the world do not. I ask for everyone’s prayers and support for the persecuted church by watching our film ‘Christians in the Mirror.’”

For more information about the film and to see a trailer: https://christiansinthemirror.com/

Rates posted assumes 25% down payment, and an ARM and fixed rate first mortgage on a Florida condotel, secondary residence. Additional required amounts such as taxes, insurance, home owner association dues, assessments, flood insurance or other such required payments should also be considered. Not all individuals will qualify for a mortgage loan. Rates cited are for instructional purposes only; current rates are subject to change at any time without notice. **Posted APR is based on Mortgage Assumptions.
Copyright © 2022 Fidelity Home Group supports Equal Housing Opportunity | All Right Reserved  | NMLS Identifier 1834853. Fidelity Home Group is not affiliated with the Department of Housing and Urban Development (HUD) or the Federal Housing Administration (FHA). Not intended for legal or financial advice, consult your own professionals if such advice is sought. Accessibility Statement  | Consent to Receive Electronic Loan Documents  |  Cookies Policy   |  Disclosures  | Email and Mobile Policy |  Fair Lending Policy  |  Mortgage Assumptions  |  NMLS Consumer Access  |  Privacy Policy  |  Terms of Use
Contact Us
407-955-4575
Click to Email
Send a Message
Schedule a Call
Schedule an Appointment