GREATER FORT LAUDERDALE, Fla. /Florida Newswire/ — Conceptual plans for the highly anticipated Broward County Convention Center Expansion and Headquarters Hotel Projects were unveiled today before the Broward County Commission, according to the Greater Fort Lauderdale Convention & Visitors Bureau. This first look at the development, which represents a significant increase in the destination’s meetings, convention and exhibition capacity, was presented as an update on the design process, with construction expected to begin in late 2018 for a sched1uled opening date in 2021. 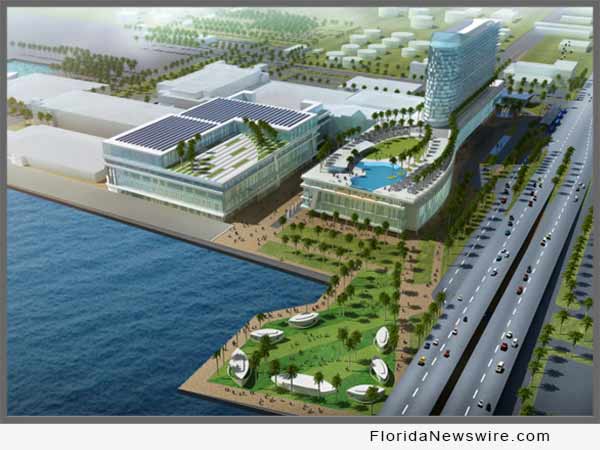 Combined with multi-billion dollar expansions of Fort Lauderdale-Hollywood International Airport and Port Everglades, Greater Fort Lauderdale continues to grow as a major player in the meetings and travel industry. Brand elevation of the destination, along with significant increases in airline service and carriers new to the destination, is also resulting in strong domestic and international leisure tourism growth.

The Convention Center Expansion and Headquarters Hotel Projects will add an additional 400,000+ square feet of contemporary designed indoor and outdoor space and an upscale 800-room, four Diamond rated headquarters hotel that will attract increased meetings business with its mix of meeting space, accommodations, retail, and dining. The proposed 22-story hotel will be prominently positioned on the destination’s famed Intracoastal Waterway with sweeping views of the Atlantic Ocean and the destination’s airport, cruise port, and famed 23 miles of Blue Wave beaches.

“This is significant news for the future growth of the destination,” said Stacy Ritter, president and CEO, Greater Fort Lauderdale Convention & Visitors Bureau. “The new facilities, especially an on-site hotel, puts us in a lead position with the meetings industry. Our success in hosting many events and conventions annually will be amplified with new infrastructure and resources that meet the needs of the meeting, event and association planner and attendee of the future and bring over $100 million of new annual economic activity to our community.”

The Convention Center Expansion and Headquarters Hotel Projects, both of which will be certified Gold in Leadership in Energy and Environmental Design (LEED), will be the centerpiece of a $700+ million Convention Center district enhancement project. Other proposed plans include a walk-in visitors center and intermodal center for public transport.

After an extensive procurement process, nationally-renowned developer Matthews Holdings Southwest Inc. (Matthews) was selected by the Broward County Board of County Commissioners to move forward with the Broward County Convention Center Expansion and Headquarters Hotel Projects.

Following the County’s approval, Matthews worked collaboratively with the County and with input from the City of Fort Lauderdale on a final conceptual design package with construction contractor Balfour Beatty Construction. Other consultants on the project include the architectural firm Stantec working on the headquarter hotel component, and Fentress Architects consulting on the convention center expansion portion.

About Greater Fort Lauderdale:
From the seagrass to the sawgrass, Greater Fort Lauderdale, located in Broward County, boasts more than 34,000 lodging accommodations at a variety of hotels, luxury spa resorts, and Superior Small Lodgings reflecting a “beach chic” vibe. Visitors enjoy 23 miles of Blue Wave certified beaches, discover 300+ miles of inland waterways that run from the Intracoastal Waterway to the Everglades, dine at thousands of restaurants and eateries, get immersed in a thriving arts and culture scene and indulge in top shopping.