TAMPA, Fla. /Florida Newswire/ — During his research for the Tampa Bay based thriller novel, “The Gaspar Triangle,” author T. Michael Cross came across many historical sites in and around West Florida but came away feeling something was missing. The city of Tampa is currently deep in a multi-billion-dollar expansion including condos, hotels and office space, along with retail and entertainment venues. Amongst these new projects, he felt there lacked an iconic structure. 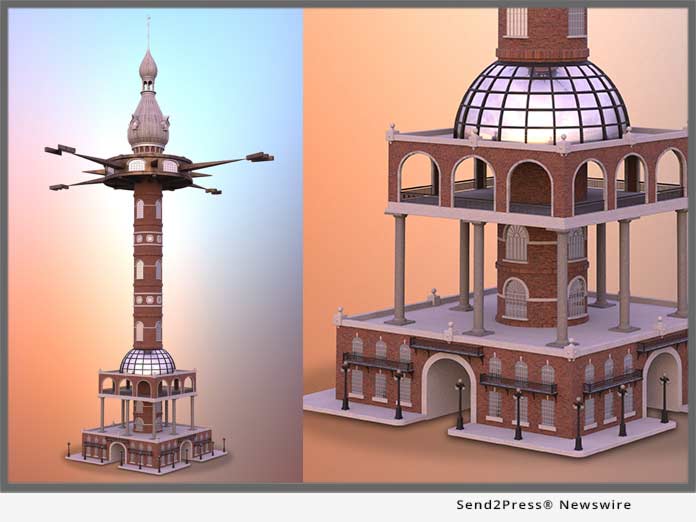 A feature that would make Tampa’s skyline immediately recognizable like Seattle, Dallas, Toronto, and Paris, just to name a few. “I recall many occasions watching locally televised events showing aerial shots of downtown Tampa and unless you lived here, or were familiar with the city, you wouldn’t necessarily know where the event was held,” said Mr. Cross.

This was something that sat in the back of his mind and he wondered if one would ever emerge.

Not intending to be the one that could potentially create such a structure, the inspiration came one day from a passing glance at the cover of his novel. In the corner was an image of an antique compass and the idea exploded from there.

One thing he did notice during those televised events was, that while you would see some of the best elements of Tampa Bay, they would focus on three main areas: Historic Ybor City, the stunning building of the old Tampa Bay Hotel, now the University of Tampa, and the beautiful beaches and waterways. Also focusing on these elements Mr. Cross designed what he calls “The Tampa Tower.”

At over six hundred feet tall, the Tampa Tower would stand high over the Tampa skyline. The observation deck, designed in the shape of an enclosed antique compass, represents the maritime history of Tampa Bay and its waterways allowing 360-degree views of the area. Educational displays filled with pertinent and historical information would be placed around the space highlighting areas of interest that can be viewed through the large panoramic windows.

Another great feature of the observation deck are the glass panels mounted within the floor which may give some visitors a moment’s pause before taking a step. The Moorish themed minaret at the top of the tower is modeled after the former Tampa Bay Hotel, along with the brick-covered main column housing the high-speed elevators.

“The base of the tower was inspired by the Centro Espanol building in the heart of historic Ybor City,” adds Cross. “Within this space would be shops, restaurants, bars and event venues. Perhaps one day a structure like this would make the great city of Tampa as easily recognizable as any other great city around the world.”

Rates posted assumes 25% down payment, and an ARM and fixed rate first mortgage on a Florida condotel, secondary residence. Additional required amounts such as taxes, insurance, home owner association dues, assessments, flood insurance or other such required payments should also be considered. Not all individuals will qualify for a mortgage loan. Rates cited are for instructional purposes only; current rates are subject to change at any time without notice. **Posted APR is based on Mortgage Assumptions.
Copyright © 2022 Fidelity Home Group supports Equal Housing Opportunity | All Right Reserved  | NMLS Identifier 1834853. Fidelity Home Group is not affiliated with the Department of Housing and Urban Development (HUD) or the Federal Housing Administration (FHA). Not intended for legal or financial advice, consult your own professionals if such advice is sought. Accessibility Statement  | Consent to Receive Electronic Loan Documents  |  Cookies Policy   |  Disclosures  | Email and Mobile Policy |  Fair Lending Policy  |  Mortgage Assumptions  |  NMLS Consumer Access  |  Privacy Policy  |  Terms of Use
Contact Us
407-955-4575
Click to Email
Send a Message
Schedule a Call
Schedule an Appointment